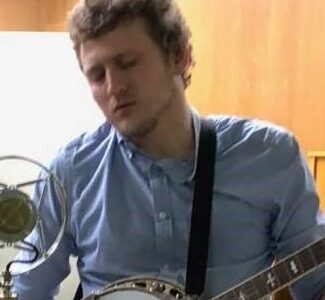 Chris Franzke was raised around bluegrass music his whole life. His parents, Mark and Mary Franzke would play and sing bluegrass/folk music and bring him and his brother to many bluegrass festivals throughout their childhoods. Chris took piano lessons at the age of 7 until he was 10 years old, and at 12 played bass clarinet in his middle school band. The summer before his Freshman year of High School at Shawnee Mission East, he decided to take up the electric guitar. His parents paid for guitar lessons from instructor John White at Big Dude’s Music City in Kansas City, MO. His influences at the time were The Allman Brothers, Led Zeppelin, and Frank Zappa.

Chris moved to Lawrence, KS when he was 20 and claims that this was the moment in his life where the “bluegrass bug” finally bit him. Since 2011, Chris has been seen on and off stage in various musical projects and jam sessions throughout the region playing guitar, mandolin, dobro, and banjo. The banjo being the instrument he’s currently most passionate about. Now he’s sharing his passion for American acoustic music with the community!